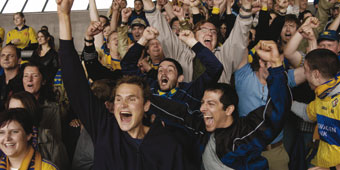 For six young men, who couldn’t be any more different, the fan club of their favorite football team, Eintracht Braunschweig, is the central focus of their lives and their friendship. 66/67 is the name of the club and the year that Eintracht Braunschweig won the German Championship. With their 66/67 branding, Florian, Otto, Henning, Christian, Tamer and Mischa have not only sworn to unconditionally always be there for each other, they also celebrate the fun they have together in all the violence after the game. And they are reckless in their radicalism.

But behind the fan façade is a deep desire for something more constant in life, something that is inviolable. Sooner or later the guys realize that their individual problems can no longer be solved within the group. Each of them has his own problems, most of which take place outside the realm of the stadium. The friends must realize that it is not their football club that stands before its greatest challenge, but they themselves …