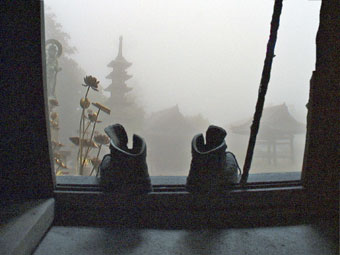 If Mecca and the Road to Santiago are the only two pilgrimages you’ve heard of, then you should get to know the oldest and longest pilgrimage in the world: the hachijuhakkasho (The Road of 88 Places). The path leads around the Japanese island of Shikoku. Due to the many temples, shrines and monks, the Japanese call it the “holy island”. For 1,200 years people have been making this pilgrimage along a route of 1,300 kilometers, marked by 88 temples. The filmmaker and journalist Gerald Koll set off in the spring of 2007 as one of the very few non-Japanese pilgrims on this trail – completely alone, with a camera. Without a Buddhist background, without a word of Japanese. Searching for the singular state of mind of a pilgrimage, “henro boke” …