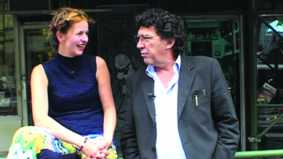 Thinking of Germany, the film director thinks of German friends who have gone to live elsewhere. The first part of the film takes him to Brazil to see his friend, cameraman Uli Burtin, who went to live in Rio de Janerio in 1979, convinced that “living in a country as regulated as Germany makes you ill.” In the second part, the film director visits his former colleague, Birgit Staudt, who has been living in New York for ten years, fulfilling her dream to become a singer in an Underground band.