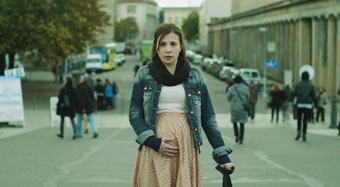 Lara doesn’t really know what she wants in life. At twenty-five, she’s about to finish her degree in architecture, but even that doesn’t really interest her anymore. She spends her nights hanging out in night clubs with her friend Nora, but hasn’t been enjoying that for a while, either. She would like to change her life but doesn’t know how.

After a wild night out dancing, Lara finds herself pregnant. Confused and hesitant at first, she throws herself into the adventure: becoming a mother. For the first time in her life she feels she has made the right decision. But then, six months into the pregnancy, she miscarries. Fearing the loss of her new-found feeling of purpose, Lara continues to carry the baby and acts as if she is still pregnant…

MEPHISTO-EFFEKTBABAMIN SESI – VOICE OF MY FATHER