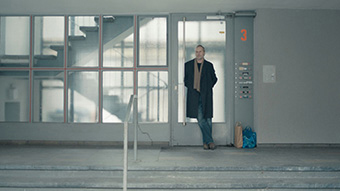 A man comes to pick up his son at his ex-wife’s house, just like every weekend. As always, he waits at the entrance to her apartment building for his son to come downstairs. But this Saturday, it takes a little longer. Their son wants to finish watching a TV show. And so it comes about that the separated couple starts talking again – via the intercom. Suddenly the former intimacy is back, the conversation almost turns into a flirt. When the son finally comes downstairs, they both painfully have to return to their roles.