AS TIME GOES BY IN SHANGHAI 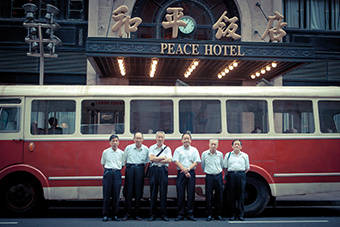 They have an exciting story behind them: pianist Jingyu Zhang, contrabassist Mingkang Li, saxophonist Jibin Sun, alto saxophonist Honglin Gao, trumpeter Mengqiang Lu, and drummer Zhengzhen Bao are the oldest jazz band in the world – the Peace Old Jazz Band. For over 30 years, they have been playing every night in the legendary Peace Hotel in Shanghai, the finest address in the city.

On stage, they are at peak performance, with loud clashes and feverish melodies they defy the present which has lost sight of history in the glittering mega city of Shanghai. In the film, the six exceptional musicians reflect back on their eventful lives: in their wild youth, they jazzed their way through Shanghai’s bars and saloons, they survived the Japanese occupation, the Communist cultural revolution, planned economy and the opening up toward the West. Over the decades, they have remained faithful to their love for jazz, for freedom and independence, which is exactly what jazz stands for. And the present is no less exciting than the past.

The film goes on an adventurous journey with the elderly gentlemen and their resourceful manager: a trip to Europe to the most important jazz festival in the world in Rotterdam. Western decadence or departure to a modern and free future?