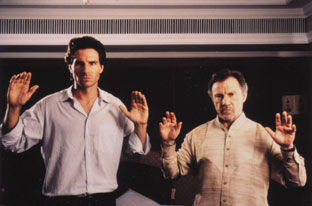 When Dr. Richard Avery’s son is kidnapped while he is attending a convention in Hyderabad, India, he faces a 24 hour nightmare. Left with only a beeper containing a text display through which instructions will be sent, Avery is taken on a wild, frantic goose chase in a strange and foreign country. Following instructions, he literally runs into a young drug dealer in the seediest part of town, momentarily losing his beeper as it flies off his belt.

The beeper’s instructions lead Avery to an abandoned building where he discovers a large bag of cocaine. Examining the beeper, Avery realizes that it is not his; he must have picked up the wrong one after colliding with the drug dealer. His lifeline to the kidnappers is gone! Fleeing with the drugs, Avery is now on a mission to find his beeper – the cocaine being his only lead. What he doesn’t know is that the site of the pickup is under police surveillance. So now the police is on his tail as well …