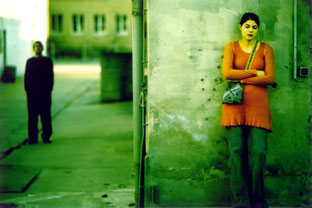 Rena has just started working in the meat factory when, on her way home, a piece of concrete from the roof nearly hits her on the head. Furious, she tries to corner the teenagers who are making life on the estate hell for her. But to her surprise, she chances upon Torben, the seductively sexy diver who lives in the neighbourhood. In the swimming pool, Rena discovers a new world against which her daily routine in the factory fades. She falls in love with Torben, losing herself in the process.