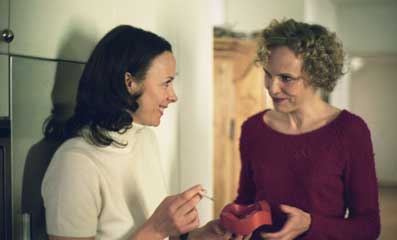 Roland is a father who works fourteen hours a day and no longer sees his family by daylight. Sybille, the mother, seeks refuge in her work as a gallery owner while Charles, the nineteen-year-old brother, struggles with the turmoil of his sexuality. In the midst of all this, young Linus sits in his room, forgotten by all the others, and tinkers with bombs to which the kitschy sculptures in the neighbourhood fall victim. Everything begins to crumble when Roland loses his job at the risk management department of a large concern and from then on has to sit idly about at home. This man of action, now forced to put on the brakes, skids full of élan and quite inexorably into a crisis which not only alienates him from his sons, but also deeply disturbs his marriage.