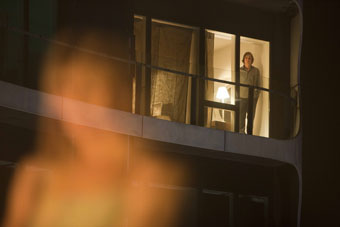 In the shadowy margin between life and death lies the hospital where Marian, an ascetic nurse in her 40s, dedicates herself like a saint to the gravely ill and the dying by giving them what is often their last contact with the warmth of a living body. Sometimes she even takes on the role of a redeemer, and helps her patients out of their misery by sending them to the soothing order of death. These moments are precious to Marian – for her, death is a moment of ultimate intimacy.

Outside the hospital, Marian lives a solitary life, driven by perfection and control. Occasionally, though, her suppressed feelings rise and make her drift away from her daily routine: one day, she meets a stranger in the bus, instinctively follows him to the video store and fantasizes about him. When Marian sees the man again she gets involuntarily linked to him in an act of shared voyeurism. The sudden act of intimacy between them first repels then fascinates, transfixes and frightens her.

Faced with the fragility of her newfound emotions, Marian realizes that she must give in to her human needs, even if this intimacy comes with a price …