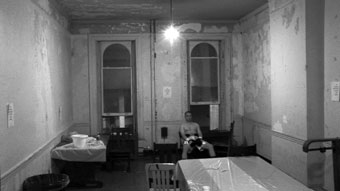 A dark attic in Munich. This is where Jürgen, an aging German professional boxer, lives and keeps in training. He has only cold water in his shower and hardly any furniture. He earns his meagre living as a bouncer in a pub. He is entirely on his own, with no manager standing behind him. Every week for months, he has been telephoning from a call shop with match makers in the U.S.A. Because Jürgen “The Rock” Hartenstein, former German middleweight champion, has a dream: he wants to make a comeback at the international level. On his own …