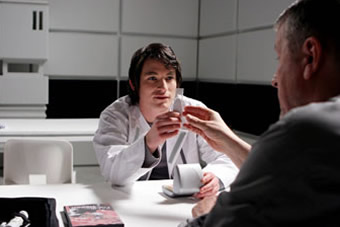 Towards the end of the 21st century: In a society that has given up all pretensions to happiness, the only thing that counts is the individual’s usefulness to society. This is the yardstick by which goods – and hence the standard of living – are allocated. It’s not a society for people like Lutz, a dreamer, a fan of nostalgic 20th century 2D movies. Rather than diligently fullfilling his quota, he sits in front of his ancient DVD player and immerses himself in a world that still knows freedom, adventures and courage.

Once a promising student of neuroinformatics, the university kicks him out because of his romantic ideas, and soon he finds himself statusless in a hopeless situation …