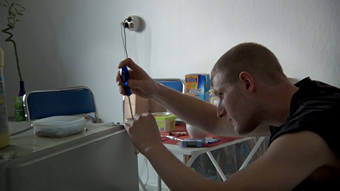 A young couple, David and Pia, one evening in their apartment. They want to watch a DVD.

Visiting friends, chatting in the garden, drinking coffee. The apartment needs to be cleaned, but David is not interested. Pia doesn’t give in.

Grilling, drinking games. The two argue until the sun comes up. David is alone in the apartment.

He carries a refrigerator upstairs. It needs to be cleaned and repaired. The mood between David and Pia is tense.

The couple sits at Burger King and acts silly.

David is traumatized from his deployment in Iraq. He deserted the US Army. Now he lives with his wife Pia in Gießen. He talks about his combat operations and the time that followed.

Pia tries to deal with the fact that her husband served in a war, that he killed people. They both live with the hope of the future.