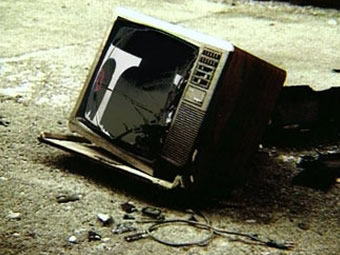 Taking leap years into consideration, 60 years amount to 21 915 days. This is the manner, namely according to days and hours, not years and centuries, that the people of our country experience contemporary history. History is a part of our lives.

The following image sequences and themes, among others, are seen:
The tattered majestic eagle of 1945. What now?
The war actually ended in 1989! Great fireworks in front of the Reichstag.
The construction site Berlin-Mitte and the almost forgotten event of German reunification. From the construction planning of the capital Germania in 1941 to the reconstruction of Potsdamer Platz.
The self-liquidation of the SDS in Hanover. Dutschke’s funeral.
The Fulda-Gap and missile crisis: one of the most dangerous moments in the history of the Federal Republic! “We once again had a narrow escape.” Missile political convention.
Germany searching for its own identity. What does it mean “History takes place in waves”? Christoph Schlingensief and his legendary Berlin revue “100 Years of the CDU”
Peaceful withdrawal of the western group of the Red Army. With a big parade.

Stefan Aust addresses theses issues as follows: In comparison to the first half of the 20th century, the years of the Federal Republic had the advantage that people had the opportunity to live in relatively boring times, times in which history in our part of the world didn’t involve mass murder. What is Germany’s practical value in today’s world?