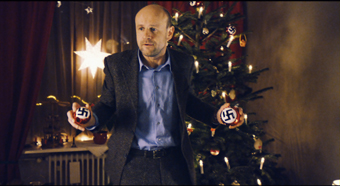 The Wölkel family intends to celebrate Christmas with Grandma, just like they do every year – but there are some shocking surprises to be unwrapped at this traditional Christmas party: Grandma Wölkel has revived the Nazi Christmas of her childhood. This wouldn’t be such a major problem, but today of all days, the family is expecting a guest from Israel – and the last thing the Wölkel family wants is to be considered Nazis. Only an unexpected coincidence helps the family to disguise the truth.