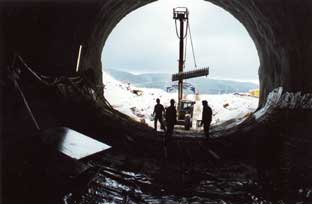 In the Thuringian Forest, a natural and man-made landscape still relatively untouched, the technically most labour- and cost-intensive motorway project in Germany is being realized. As part of the project „German Unity“, Thuringia is to be connected to Northern Bavaria by a 4-lane motorway. When, in the autumn of 1998, the first bridge and tunnel workers started arriving with their heavy gear, environmentalists from all over Germany were sitting in the trees and stags were running across the building site.

In February 2000, work started on the tunnel „Berg Bock“. Day in, night out, in two shifts at 12 hours each, the tunnel workers blasted their way into the hill. For one and a half years, the film follows the events surrounding the building of the tunnel, telling the stories of its builders, the engineers and miners as well as those of the locals living „door to door“ with the future motor way.