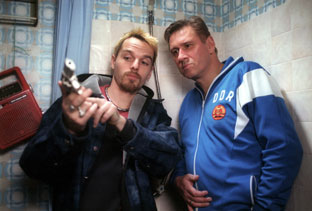 End of November, time is shrouded in mist. Somewhere in the middle of nowhere there’s a “datsche”, a weekend cottage in typical uniform GDR style. Hundreds of times, Elke and Arnold, a childless couple, have spent a night or two here. But that’s now over: Elke has persuaded Arnold to sell the datsche; tomorrow morning, the estate agent will be calling. It’s obvious that Elke is fed up with the petit bourgeois narrowness, the never-changing rituals. Her husband’s not quite convinced but has acquiesced since the agent has offered a pretty sum.

As the couple share the joint bed for a very last time, each of them is lost in melancholy thoughts. Suddenly the door flies open – two men enter. Armed burglars! They tie up the two, grab all the money, jump ino the car and are gone. But not for long …