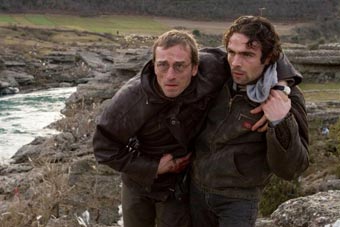 Eduart, a 22-year-old Albanian, has committed a murder in the gay scene in Athens which is not traced back to him. When he’s eventually deported to Albania, it’s for different reasons. Back home, where he has no friends and no ties, he is sentenced to prison for a theft he had committed earlier. The conditions in jail are inhuman, but through the contact with his inmates and especially with Christof, a German doctor, Eduart begins to change.

When a political riot breaks out, the prison is stormed and the prisoners manage to escape. While fleeing, Cristof is badly injured and Eduart tries to save him, but in vain. He loses his newly-found “father” before he can tell him his dreadful secret. Alone again, Eduart chooses the hard and lonely way to real freedom: He crosses the Greek border and give himself up to the police.