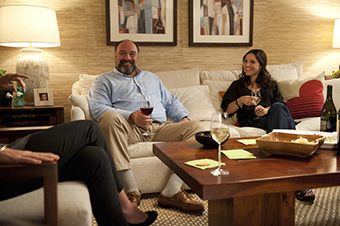 Eva is divorced and the single mom of a daughter who is about to go away to college, a fact which troubles Eva. At least her work as a masseur distracts her a little, until she meets the funny and likeable Albert who also lives alone and appears to be a kindred spirit. A wonderful romance sparks off between the two of them.

At the same time, Eva becomes friends with Marianne, one of her customers who happens to be a great story-teller, but also constantly talks badly of her ex-husband. When Eva learns the truth about Marianne’s ex, she begins to question her relationship to Albert, which seemed so perfect at first…