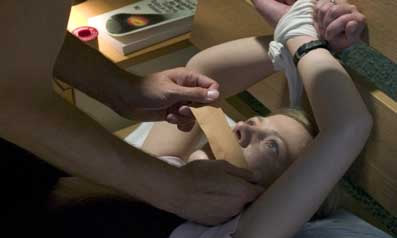 “You are in a space with no entrance, no window, and no ventilation system. How do you feel?” “But how do I get in?”, Irene asks evasively. Her friend Paula insists, “How do you feel in this dark space?” But Irene gives no answer. She knows this space. It is hers.

The space in which Irene lives, wrapped in emptiness. Sitting with Paula in a bar. Walking down the university’s long hallway. Standing in front of her students explaining that only very few beings can breathe in water low in oxygen. Sitting in the laboratory of the Institute of Biology. Walking along the wall that separates her apartment from the prison next door. Standing at the window of her room looking towards the prison. A space Irene lives in as if she were waiting.

One day, the doorbell rings. Irene hesitantly opens the door. A man charges in, quickly shutting the door behind him. A fugitive from the prison next door, now making himself at home in her apartment. A stranger who suddenly, forcibly, enters her life. And Irene is unable to get away. Slowly it becomes evident that she doesn’t want to get away. On the contrary: Irene has lured the stranger, sent him letters to prison. Now he’s holding her captive like a hostage, observing her life.