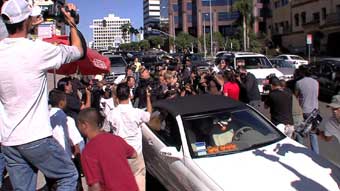 The film tells the story of two former LA gang members who founded JFX Direct, a Los Angeles-based celebrity photo agency. Now in their 30’s with families to support, these two best friends find themselves fighting a complicated reality of alliances and rivalries within the professional world of high-profile celebrity photography and their not so far behind lives in the often fatal world of the LA gang scene.