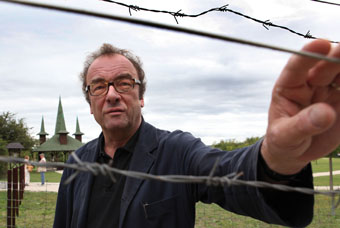 In a remarkable manner, Austria’s borders symbolize the history and formation of the European frontiers – of the disappearing ones and those newly drawn -, they are old and new at the same time. Old because of the deep trenches that evolved alongside their lines and the scars left behind that are still palpable. Old as well because there were different limitations 100 years ago than thereafter and because these old transgressions have been revived. New, because they are disappearing (again) in the course of the expansion of the European Union. New as well because they are reset at the external borders of the Schengen countries, just a few hundred kilometres from where they used to be.

The film accompanies the writer Robert Menasse to the inner and outer borders of his homeland in the heart of Europe, on his quest for a European culture into a new, never known boundlessness, as well as for new borders. CROSSING BORDERS illustrates the limitations in minds and in landscapes, as well as in culture and politics.