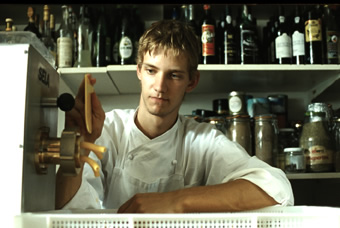 Art and Vapors. A feast for the eyes and the palate. Cooking is as popular as ever, differentiated into all areas, including molecular biology, sophisticated chopping, cooking and presentation techniques. Cooks are all over television and viewers religiously copy them in their home kitchens. Television kitchen studios, luxury steamers, fancy restaurants in Paris: these are the visions with which young people start their culinary training.

The film shows the reality of it all, which is much different than all the clichés. It delves into the desires, dreams and difficulties which accompany this profession. Strenuous, often monotonous work in hot and steamy kitchens is the price for a well-prepared meal, a short-lived piece of art which is quickly devoured and lost in indulgence.

Large-scale kitchen and up-scale restaurant, the film shows two worlds and two dreamers, Julien and Georg: whether they will reach their self-imposed goals remains uncertain.