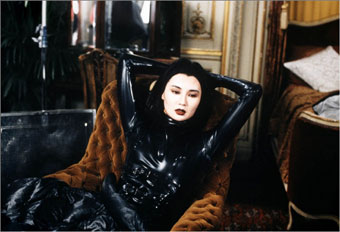 The celebrated Hong Kong movie star Maggie Cheung (as herself) arrives in France to make her first European film. The former Nouvelle Vague director René Vidal, whom success recently has shunned, hired her as his protagonist, the mysterious gang leader Irma Vep, in a remake of the legendary silent movie series “Les Vampires”.

Maggie, steeled in numerous Hong Kong action movies, has to realise that the European arthouse cinema is not without its drawbacks. From the outset, the shooting is encumbered with chaos and hitches, while director René turns more and more into a egomaniac nerve wreck who wants to turn Maggie into a kind of cat woman and dresses her in a tight-fitting, highly uncomfortable latex suit. When, as a response, the lesbian make-up artist develops blatant erotic feelings and the interpreting assistant director causes more misunderstandings than she helps to solve, things on the set go from bad to worse. Maggie becomes embroiled in a labyrinth of uncontrollable events …