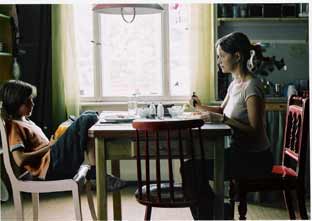 The film talks about yearning, about conflicts and banalities in the life of Jeanette Bauch (27), her son, Louis (10), and 50-year-old groundsman Harry Schirmer. Jeanette loves her son – perhaps a little too much so … And Louis likes Harry because he’s as old as his grandpa. Harry loves football, but that holds no future for him. Jeanette falls in love with Philipp, but he’s married with a child. In the end, Harry wants to give up and it’s Jeanette who saves him without intending to. The film talks about people who don’t lose hope and attempt to break away from their routines …