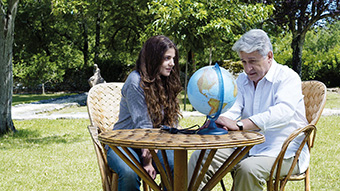 Juliette excelled at school and is preparing herself for acceptance at an elite university. Everything seems to be going absolutely smoothly. But suddenly she ist confronted with the terrible news that her beloved father, to whom she is very close, is suffering from a degenerative disease and doesn’t have much longer to live. Devastated, Juliette reacts unpredictably, at times aggressively, and above all, completely inappropriately.