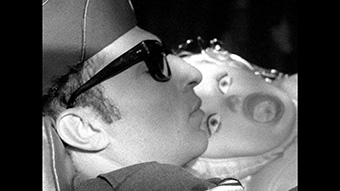 King Blank has a borderline syndrome and a preference for military uniforms, Queenie Blank works in a go-go-club – two lost souls living in an airport hotel. While he aimlessly cruises the streets in his car, listening to manic radio preachers or preaching to empty bible houses and prostitutes, she listens to funky music and dresses up for her work in the Pussycat Lounge where it’s her job to listen to the guests’ weird fantasies. When the couple aren’t living their own lives, they heap venom and loathing on each other. Can their relationship not have a fatal ending?

CUP FINAL / GMAR GAVI´ATOO SENSITIVE TO TOUCH: SEX AND TALK IN THE USA