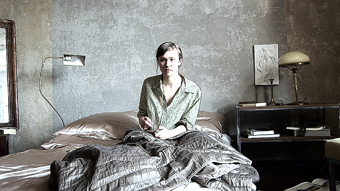 By the early light of dawn, paramedics carry the corpse of a young woman out of a villa in Berlin. Her name is Daisy, she was a successful medical student. A few days earlier: Daisy’s housemates throw a party to celebrate her graduation from medical school. In spite of her academic success, Daisy is deeply dissatisfied: she vacillates between uppers and downers and changes her sexual partners increasingly often. Daisy gets a real kick out of seducing the now single Marie into a lesbian affair. The house belongs to Freder. He inherited it and rents out rooms to fellow students. He enjoys stirring up the relationships between them and tasting the power he has over them. He claims he could get any woman to prostitute herself and proves this with Lucy, a country girl who cleans the house for them. When Lucy admits to the assembled housemates that she is going to interview for a job with an escort service, Daisy spontaneously decides to join her. Marie is determined to stop her. She locks Daisy in the bathroom. In protest Daisy overdoses on a handful of pills. Daisy’s death puts an end to the experimental games. In order to survive, Marie and Freder decide to “go bourgeois before it’s too late.