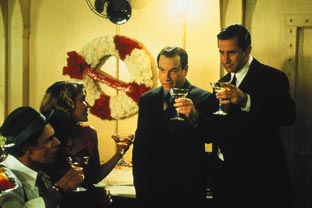 Along with Lucky Luciano and Bugsy Siegel, Meyer Lansky was part of the Mafia triumvirate of the 1930’s and 1940’s. While Luciano came to fame with brutality and Bugsy by “founding” Las Vegas, Lansky distinguished himself as a wizard of crooked accounting and strict business methods.

Due to his quietly clever ways, the authorities never were able to prove his connections to the Mafia until his death in 1983. The film begins in late 1970’s Israel where Lansky desperately tries to become a citizen. Decision is in the hands of the Israeli Supreme Court, and Lansky kills time by remembering his past.