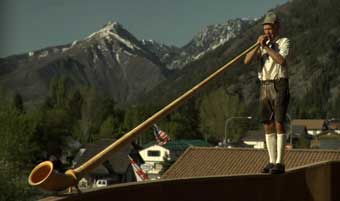 Leavenworth is a small town in Washington State. After the Great Depression and the huge migration following, the small provincial nest almost degenerated to a ghost town. Saving grace came in the form of an idea which not only prevented the town’s demise, but to this day attracts more than two million visitors per year. Unusual but familiar are the new clothes in which Leavenworth greets its guests.