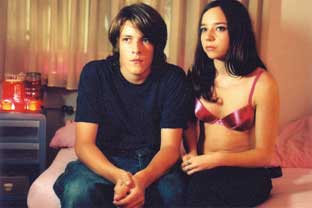 Sandra has just moved to a new neighbourhood. She‘s rather shy, and her classmates don’t make things easier for her, either. She just doesn‘t fit into the cool clique surrounding Nadja and Isa. But when she meets 14-year-old Mike who lives across the road, all problems seem forgotten. She falls head over heels in love with him. However, she doesn‘t know that Nadja, too, has had a crush on Mike for some time—and Nadja never misses an opportunity to score with her feminine charms.

Still, Sandra and Mike slowly grow closer. But soon their young love is put to the test. One day, they observe Mike‘s mother with a stranger. Mike is outraged. He can‘t understand that, just a year after his sister’s death, his family is now to be destroyed completely. But Sandra is bewildered, too. How can she explain to Mike that the stranger is her father? Afraid of losing Mike, she tries everything to keep the matter secret. But by doing so, she entangles herself in contradictions …