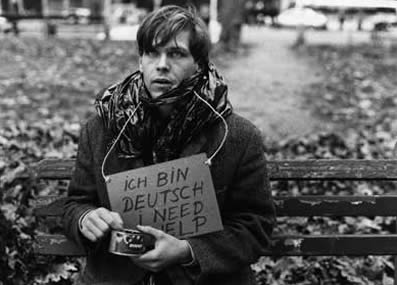 “WILL YOU STAND ME A DRINK?” – Christian Land is reading this for the third time already. He looks over to the woman at the neighbouring table, sees her half-empty glass and asks, “Why should I?” The woman gives no answer. Instead, a second note lands on his table. “I LOVE YOU”. Land does not understand. And while his questioning glance is seeking support from the man behind the bar, another note is pushed onto the table before him, “FORGET IT. YOU’VE NO NOTION OF IT ANYWAY.” Land looks up irritably and discovers that the woman is standing right in front of him. She puts a key and a bundle of crumpled banknotes on the table and says, “You pay the tab. This is the key to my New York flat. Lockwood 1340. It’s yours, if you want it.”

Thus begins the journey of Christian Land into the land of unlimited opportunity for his hopes. And he will not realise until the end that he is a born resistance fighter combating the hopeless haste of the clever and the well-adjusted.