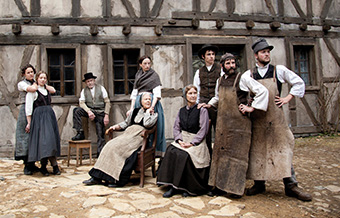 FILM STORIES – Between the 50th anniversary of the Oberhausen Manifest and his 80th birthday, Edgar Reitz made a new film. With HOME FROM HOME – CHRONICLE OF A VISION, Reitz attempted to link his world-famous HEIMAT trilogy with his earlier work. Through numerous castings in the Hunsrück region, complete in costume and make-up – almost like a family constellation – a whole village was transposed into the year 1840. A real Hünsrück boy got the leading role, despite the fact that he actually studies medicine, and at the end of the shooting, even Edgar Reitz stepped in front of the camera, because Werner Herzog talked him into it.