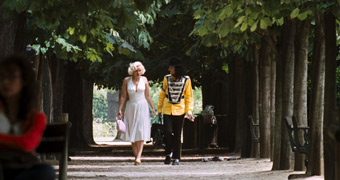 Mister Loney, a Michael Jackson impersonator lives alone in Paris and performs on the streets to make ends meet. At a performance in a retirement home, he falls for a beautiful Marilyn Monroe look-alike who suggests they move to a commune of impersonators in the Scottish Highlands. On arriving at the seaside castle, they discover everyone preparing for the commune’s first-ever gala – Abe Lincoln, Little Red Riding Hood, the Three Stooges, the Queen, the Pope, Madonna, Buckwheat, Sammy Davis, Jr … And also Marilyn’s daughter Shirley Temple and her possessive husband Charlie Chaplin …