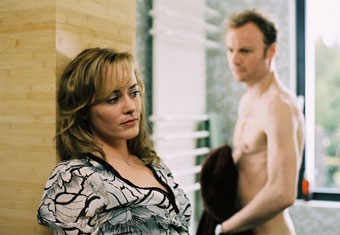 Gerrit and Markus are friends, both in their mid-30’s, and on their way to Mallorca in the hope of securing the contract that will save their ailing architects’ association. But the trip ends in fiasco. Gerrit realizes it’s become pointless to go on waiting for their breakthrough and decides to change jobs and start out again.

Markus, though, is not prepared to admit failure. Without anyone knowing, he’s amassed a pile of debts just so he can go on pretending to be the successful husband and father who treats his family to a life in luxury. That kind of delusion is anathema to Gerrit. But then Markus dies in an accident, and he is forced to acknowledge that he has had more to do with Markus’ life than he’s been prepared to admit. Especially when he falls in love with Markus’ widow.