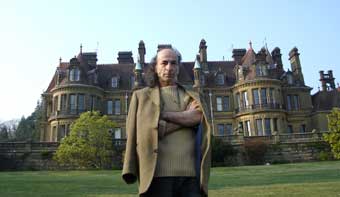 In 1962, the young Persian poet Forough Farrokhzad travelled to the end of the world to visit and make a film about a leper colony. Her film, “The House is Black”, was to become world-famous and change a small world: the world of a small boy who had the good fortune of meeting her. Overnight, the boy is whisked away from the leper colony into the midst of the pre- revolutionary Tehranian bohemia.

A documentary fairy-tale that begins in northern Iran and winds its way to Munich’s Westend. There, the Iranian poet in exile, Hossein Mansouri, goes in search of the boy and discovers a real oriental fable about his own roots and the magical power of words.