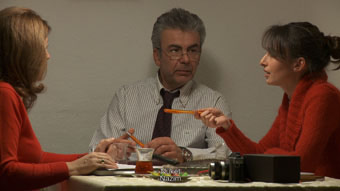 Yusuf’s everyday life is dominated by routine. He has made himself comfortable in a life between the television and the computer and is happy that way. But the people around him try to break him out of his beloved routine. His wife and his buddy Tamer convince him to go on a fishing trip on the frozen lake. He reluctantly agrees to go, but once there, he gets a chance to restore his image as the provider and head of the family.