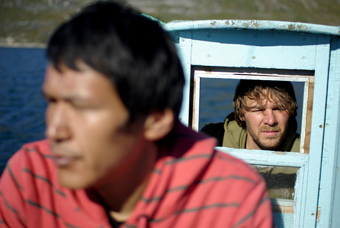 Malik’s life in the small capital isn’t much different from other young men’s. He works as a carpenter, hangs out with his friends, and toys around between the Danish and Inuit languages.

But everything changes when he is diagnosed with a serious illness and only has little time left to live. Overwhelmed by this sudden confrontation with death, Malik decides to keep his illness to himself. His friend Mikael invites him to go on a boat tour with him, a memory from the earlier, happier days of his youth. What is meant to be a relatively unspectacular trip to a fjord turns out to be a transcendental journey to the end of the world, during which Malik comes to terms with moments of wasted time in the past and finds peace with his fate.