PLEASED TO MEET YOU 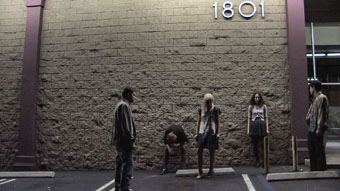 Shot in a single night in Los Angeles, the film operates on the border between feature and documentary and portrays a generation caught up between self-expression and the quest for real life. After a quarrel and a rather lengthy period of silence, the young writer Julian invites his best friends Carson and James over to his house. When James unexpectedly shows up with the attractive Norwegian girl Terese and Carson brings along a casual acquaintance, the evening gets out of hand. The smalltalk turns into an intense debate about friendship, trust and secrets. While Julian, James and Carson delve ever deeper into the conflicts of their friendship, Byron and Terese become the evening’s secret winners. On their night-time journey through Los Feliz, the five experience painful truths and surprising concessions not only about the others, but also about themselves.