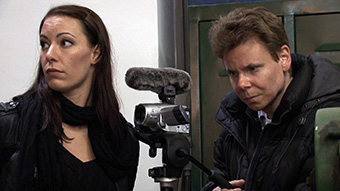 Robert Tarantino: A no-budget filmmaker and Viennese original. The shooting of his most recent work BLOOD CITY MASSACRE is the raison d’être and means of therapy for this shy man. His dedicated (amateur) ensemble becomes a surrogate family, and his leading actress Marie is someone he would gladly have by his side. The film follows the “rebel without a crew” during the planning and shooting of their work.

A film premiere: Robert Tarantino timidly greets the audience. After uploading the trailer to his film, he received an invitation to an underground festival, he proudly reports. The premiere guests – crew, friends, trash-film aficionados – are thrilled.

From here, Houchang Allahyari takes a step back: into Tarantino’s bourgeois life. Robert, whose real name is Wolfgang, quit his bread-and-butter job to devote himself to art. Under the alias Wolfgang Morrison, he does gigs as a songwriter in little saloons. His parents ignored his dream, a huge disappointment that Wolfgang to this day processes in his trash-films: filmmaking as a passion, filmmaking as therapy.