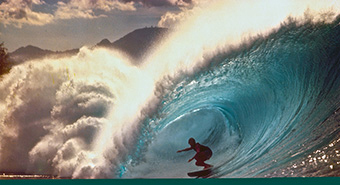 The film tells the story of the early surfers in Indonesia who, back in the 70s, pioneered a new surfing lifestyle of adventure and surf exploration. Surfing became an addiction, an attitude, and a way of life – one that sometimes was seen through the lens of psychedelics. To finance their addictions, some turned to drug-smuggling, like Mike Boyum who now is a man shrouded in mystery of near-mythical proportions. Others like Bruce Raymond, Bob McKnight – founders of Quicksilver, a company for surf gear – und Martin Daly funnelled their love of surfing toward more legal pastimes and became famous as well as wealthy.

CUP FINAL / GMAR GAVI´ATOO SENSITIVE TO TOUCH: SEX AND TALK IN THE USA