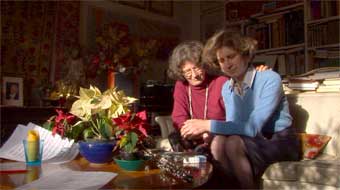 The film portrays three aristocratic single women, torn between traditional expectations and everyday life, between manor house and pre-fab high-rise buildings. Unable to live up to their parents‘ expectations, they have to scale down their standards and re-orientate themselves. Within the nobility, the male family line is valid. To belong to noble society, they have to either marry a man with a title or lead a solitary life.