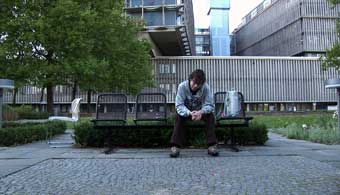 Oliver has cystic fibrosis. It is a hereditary disease which affects one in 10,000. That is a lot. It mainly affects the lungs and the pancreas as well as other organs and body functions. There is no cure for cystic fibrosis, you just die one day. Oliver was „lucky“: according to statistics from the 80‘s, he should have been dead for 13 years by now. Lately, however, the rapid bodily decay, the constant need for oxygen and general weakness are making everyday life almost impossible.

What should one do, when one is 30, has cystic fibrosis and will probably die within the next two years? Oliver decides on a lung transplantation. On the 9th of August 2006 he goes to hospital to wait for a lung. The film accompanies Oliver on his wait for the decisive call, which nobody knows if or when it will come, nor the consequences it will bring. The film shows the everyday hospital life which frequently drifts into a psychological ordeal; it talks about Oliver‘s fears and joys, hopes and doubts. And finally of his life-long battle between body and mind.