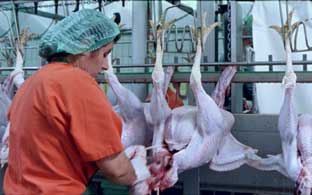 Ewa escapes from a desperate situation to the slight chance of a better life – from Poland to the life of an “illegal immigrant”. In tow her 8-year-old daughter who, she hopes, will have brighter prospects for the future. Survival requires a fighting spirit.

The struggle to survive leads Ewa to the low-wage sector of the modern food industry. She starts out as a poorly paid migrant worker – one in a crowd of strawberry pickers brought in from abroad for a few weeks, sleeping in containers. Later, she finds work in a production line gutting turkeys. Ewa is forced to react quickly to all opportunities and dangers, to recognize possible steps forwards – be it acquiring a better cleaning job or taking on another line of work. That requires self-discipline, despite her continual exhaustion and isolation – a perseverence difficult to maintain …