THE CALL OF THE GECKOS 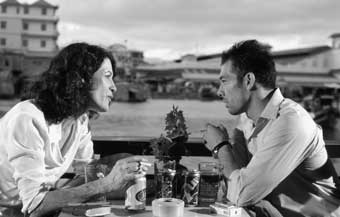 For the first time in 15 years, 28-year-old Binh returns to Vietnam from Europe to visit his village in the Mekong Delta. On arriving he discovers that the village he remembers so vividly no longer exists: Gradually, the tide has eroded the soil. The only remains are a few huts, but the waters prevent him from getting there.

In the hotel he meets Olivia, a 50-year-old Australian. It’s her first trip to Vietnam, and she’s visiting all the places her ex-husband, Sean, was stationed at during the Vietnam War. Olivia is trying to find out what makes this country and its people tick and what broke Sean’s backbone. She tells Binh that her ex-husband returned home wounded and traumatised and that their young marriage couldn’t cope with the pressures. Later, in Olivia’s room, Binh finds a photo of Sean. Long-repressed memories well up.