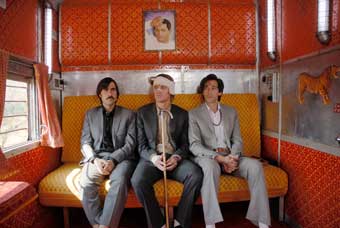 Three brothers who haven’t been in touch since their father’s funeral a year before set off on a voyage on the “Darjeeling Limited” across India with a plan to find themselves and bond with each other – to become brothers again like they used to be. It’s Francis who nearly lost his life in an accident who masterminds the whole trip.

Their spiritual quest, however, veers rapidly off-course because each of them has secrets he’s not willing to disclose to his brothers – and due to events involving over-the-counter pain killers, Indian cough syrup, and pepper spray. Only Francis knows that the trip will lead them to their mother who lives as a nun in the Himalaya and who hasn’t seen her sons in years. And who furthermore has no desire to meet up again with them.