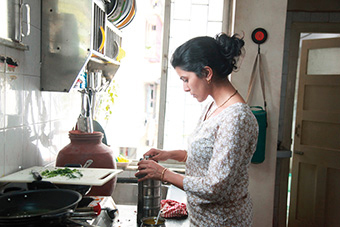 Ila wants to spice up her marriage. She wants to win back her husband with her cooking talents because she feels neglected in the Indian metropolis Mumbai. But thanks to the Dabbawallas – a service that delivers thousands of delicacies to Mumbai husbands from their wives – the special lunchbox she prepares for him ends up being delivered to Saajan, an office worker who is about to retire and who, just like Ila, feels terribly alone in the big city.

When her husband doesn’t respond, Ila is astonished and places a note in the next lunchbox – and receives a reply from Saajan. Ila answers back and they start sending messages to each other, opening up to one another. They admit to their loneliness and fears, their memories and little pleasures. They offer comfort and support to one another in a city which has buried so many of its inhabitants’ dreams and hopes. They have never met, but with their notes they start to slip into each other’s real lives …