THINGS BEHIND THE SUN 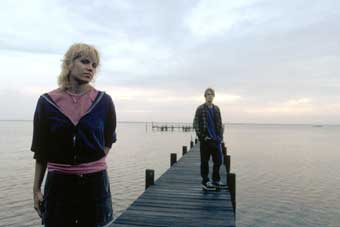 Sherry is a boozing, promiscuous rock singer who has become popular on campuses after building a following through the Florida bar scene. Her songs are filled with emotional pain. When a song of hers about rape shoots up the college rock charts, Owen, a journalist on a music magazine and a childhood friend, comes to town to profile her. It transpires that Sherry was gang raped and that Owen not only knows who did it but was a forced perpetrator of the crime by his elder brother Dan. Owen attempts to help Sherry remember the details of her worst experience, supposedly for her sake but also to purge himself of his guilt.