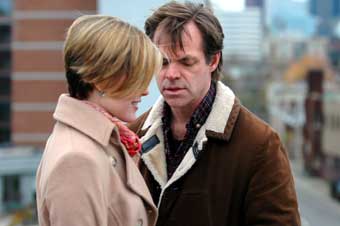 Friday night in Toronto’s lower west end. Chatter from a dinner party in Harry and Carol’s nouveau-riche condo drifts through an open balcony door, as two freebase cokeheads, Pretty and Johnny, have a party on their own in the alley below. As the dinner guests leave, the hostess is nowhere to be found. Until, a wet thud and a sharp scream rise up to the balcony.

Pretty stares in horror at Carol’s body, splayed on the alley floor, as Harry screams for help from above. The sharp burst of police sirens sends the cokeheads running as Peter, a middle-aged police officer, sprints from his cruiser to check Carol’s vitals.