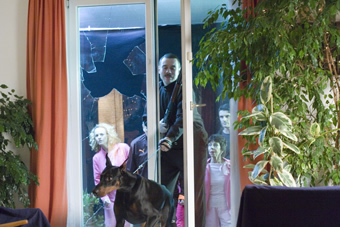 Austria is under the reign of a charismatic right-wing woman, who, with the help of the “People’s Party”, has come to power: Sieglinde Führer rules the country with polka sounds and an iron fist. Six months after the “friendly takeover” by the People’s Party, law and order has been instilled in the country, EU membership is a thing of the past, and the Schilling has been reinstated as the country’s currency – and suddenly primitive instincts rear their ugly heads from once harmless citizens. Under the well-liked populist Chancellor Dr. Sieglinde Führer, hatred, intolerance and violence spreads.

Difficult times begin, not only for non-conformists. During Midsummer Night celebrations, while a big polka-show with Sieglinde is broadcast on television, the seeds bear fruit. In the midst of prejudice, brutality and narrow-mindedness, two young medical students, a mentally-disabled man and a prostitute are the last “decent” people who get a close-up view of this new Zeitgeist in a “completely overhauled” Austria.